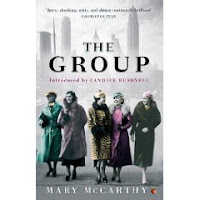 One of the wonderful things about book blogging is the way that bloggers can enthuse you to read a certain title. One of the books that I have been longing to read since I read a review by Paperback Reader back in July is The group by Mary McCarthy. As I had just embarked on my Virago Venture, I decided to wait until it had been reissued by Virago, so that I could read it as part of the challenge. Sophie at Virago kindly offered to supply me with a copy, which I was lucky enough to recieve before the release date (which is today!), although it was under embargo until then. I'm actually writing this review the week before (to be posted on the day), as I devoured the book last night, and wanted to get my thoughts down while it was still fresh.

Described on the back cover as a 1930s Sex in the city (with foreword appropriately written by Candace Bushnell), the book follows the lives of eight friends who have just graduated from Vassar, and was one of the first books to openly portray the experiences of marriage, motherhood, friendship, and contraception in the 1930s. We meet Kay, who has just got married to her college sweetheart, Harald, and follow her through starting work, and learning to cook. Libby tries to gain a career in publishing, and starts out by reviewing books, only taking the reviews so seriously that they are too long to be of use. Dottie falls in love with a man who is only interested in sex, and not a relationship, and ends up enagaged, even though she recognises that she would rather be with the other man. Lakey goes travelling around Europe, while Priss struggles with motherhood. Several of the girls have stressful experiences trying to be fitted with the cap to give them some control over pregnancy.

I thought this was a wonderful portrait of 1930s New York. I enjoyed the way that the chapters tended to focus on a single girl, whilst interleaving the stories of the others, which made me feel that I was really getting to know the individuals. But most of all I loved the feminism of the book; it discusses so many important issues which would have remained unsaid at the time. Published in 1963, it was extremely popular when published, staying on the New York Times bestseller list for 2 years, and has now featured in the Guardian's list of 1000 books that you really must read.

There was an interesting article about the impact of The Group in the Guardian at the weekend which you can read here.

Just the one Virago edition therefore, above. I am really excited that Virago have republished and urge you all to add this to your Christmas lists!
Posted by verity at 08:15