The semi-attached couple and The semi-detached house (Eden)

I received this book as a "new house" present from Heather who reads this blog (and who has kindly sent me books before). Of course it is an exceptionally appropriate book since the house that we have purchased, and just moved into is a 1940s semi.

I couldn't resist starting with the second book in the volume, The semi-detached house. Of the two books, Semi-Detached was written second, but published first, and it was only when it met with success that the earlier book was brought into print. Set in the Regency period, and thus a somewhat older house than ours, it felt a little like reading Austen or maybe EH Young (although not somehow so good), being a book plotted mainly around social manners and social convention. It starts with Lady Chester moving into the semi-detached house, and being somewhat horrified that she has such adjacent neighbours, the Hopkinsons. It is not until the Hopkinsons offer hospitality to Lady Chester and her Aunt Sarah after a chimney fire in the kitchen that the two sides begin to get on, although they are not socially very well matched. Other neighbours, The Sampsons, are introduced, intent on social climbing, but somehow not as good as the Chester household. There is a lot of matchmaking and somehow everything seems to end happily.

It's now nearly three weeks since I read the other novel in the book, and I'm afraid I can't remember much about it! It's a story about a newly married couple, who didn't exactly marry for love. I just remember feeling glad that I will be marrying for love very soon!

This was a very early VMC (number 16 on the list), and was only published once in an original green edition, although the copy that I own is the black Dial Press version.
Posted by verity at 18:31 1 comment: 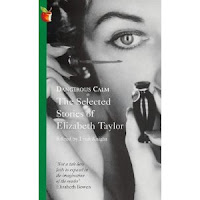 I was a little disappointed by Dangerous calm, the selected stories of Elizabeth Taylor. Not because of the quality of the stories, which, like her other short story volumes are excellent, but mainly because most of the stories had already been published in VMC editions of her other short stories. Whilst it did include 2 previously unpublished stories, I felt disappointed as I was looking forward to a completely new (to me) collection of her work.

It's been published once by Virago in a modern green cover; I picked up the earlier (non VMC) hardback edition which features this cover:

(I think the lack of a beautiful original green cover edition with pretty flowers on the front was another reason behind my disappointment if I'm honest)
Posted by verity at 15:01 2 comments: 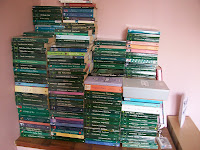 They are tripled stacked here, and the eagled eyed among you will spot a non-VMC edition of a VMC which I fished out to reread and forgot about, but here is my complete collection of VMCs, which will go downstairs in our front room once the shelves are put in (the only way that I could get my collection of fiction to fit in the third bedroom...).
Posted by verity at 10:41 10 comments:

Who'd have thought that I'd want to put "Wharton" and "wonderful" in the same blog post? I know the last Wharton book that I wrote about (her collected short stories, Roman Fever), were enjoyable, but Ethan Frome was a complete departure for me from the other Wharton books that I've read. And it's all about the setting I think. Set in a New England town, and featuring Ethan Frome, a farmer, it couldn't really be much further away from the busy world of the New York socialites. It's a slim volume, which is why I picked it up (I thought I might be able to handle a small dose of Wharton), but actually, I would have loved it to be a bit longer.

A rather wonderful love story about Ethan Frome, and his invalid (and rather demanding) wife Zeena. Their marriage was not a love-match, but one of convenience after she nursed his mother through her last illness, which she claims is the reason why she is so poorly now. Although, the reader surmises that perhaps a large part of her illness is caused by her imagination. Zeena's cousin Mattie is sent for to help around the house (although she isn't very helpful - quick to learn, but just as quick to forget how to do things). As the farm is so isolated, she occasionally goes into the town for an evening's entertainment, and Ethan always walks in (at the request of Zeena) to walk Mattie home again. Ethan falls in love with Mattie and seems to see her as representing the happiness that he doesn't have with Zeena. I don't want to say more without revealing spoilers, but I was gripped to the end to find out what would happen with the central characters.

I just thought that it was beautifully written, and I loved it. It was not what I was expecting frm an Edith Wharton at all. Let's hope that more of the remaining Whartons (I think I have 8 to go) are like this.