The old man and me (Dundy)

I actually read this before I was struck down with mumps, so apologies for not remembering that much about it! I had been looking forward to reading this book for a while, since reading the Dud Avocado very early on in the VVV, but had been waiting for a second hand copy to turn up.

It tells the story of Honey Flood, an American girl, who comes to London to find her quasi stepfather - the man who married her stepmother after her father died, called Charles McKee. She sets out to seduce him in an attempt to get his month.

In some ways it was very similar to the Dud Avocado, I found myself a bit annoyed by the narrator. It's just been published once by Virago with a modern cover.

First of all an apology; mumps got into the way of me getting on with my VMC TBR and getting through 4 books as planned last week. Should not make promises! But I am back, and with a lesser known VMC that I have found really rather readable and enjoyable!

As the title suggests, The Orlando trilogy, is comprised of 3 books, telling the story of Orlando and his family throughout the 1930s where they wield considerable power, and then their decline as we move towards the 1950s. The first book, Orlando King, is a retelling of the Oedipus story - Orlando is brought up on a remote island by a friend of his mothers, and eventually returns to England where he finds his biological father, and ends up marrying his stepmother after his father dies. In the second book, Orlando at the brazen threshold, the action shifts to Italy where Orlando has moved, and he is joined by his 17 year old daughter. He reads the diaries of the man who brought him up in an effort to understand where he came from. Finally Agatha tells the story of his daughter after Orlando has died, she moves back to England.

They are fascinating stories of society in the 1930s, 1940s and 1950s and I enjoyed the book far more than I was expecting to.

This is Colegate's only VMC, and it's just been published the once by Virago with a modern green cover. I rather like the angle at which the car is photographed and it certainly makes me think of the 1930s. Isabel Colegate I think is probably more famous for her novel The shooting party, a book that I have only heard of and not read, but something I would now like to read.
Posted by verity at 18:43 No comments:

I'm determined to make up for not reading any VMCs last week by reading my four newest acquisitions this week, which don't fit onto the VMC TBR shelf. First of the four is Crewe Train by Rose Macaulay. Macaulay was a fairly prolific novelist, most famous for her last novel, The towers of Trebizond, but only three of her books have made it into Virago Modern Classics, none of which I have yet read for the blog.

Set in the 1920s, Crewe Train tells the story of Denham Dobie (what an amazing name that is!), who lives with her unsociable father in Andorra. Her late mother's relatives visit, and take her back to London for a visit, putting her straight into the world which her father has sought to escape. It is difficult for her to join in with the socialising and dinner parties - it is definitely beyond her comfort zone. Eventually, she finds another serious person, Arnold, who she falls in love with and marries.

What I liked about this book was that it made me feel that my dislike of the glittering social worlds portrayed in Edith Wharton books which I always struggle to finish was perhaps justified. Certain sorts of people are just perhaps not as good at social situations as other people, but that doesn't necessarily mean that they won't settle down happily.
It's been published just once by Virago with a modern green cover - interestingly, it is numbered VMC 385, which is a duplicate with Where the apple ripens!
Posted by verity at 19:58 2 comments:

New Shelves for my VMCs!


A little while ago, I showed you my VMCs, all sadly piled up and awaiting the construction of their special shelves. Finally this has been done! Don't they look smart? 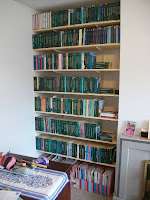 And a close up so that you can peruse the titles a bit better (they're arranged alphabetically by author at the moment - my only hope of finding things!) 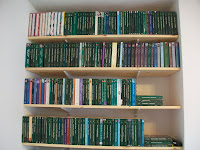 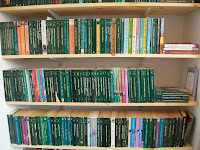 I picked up The overlanders from the Virago TBR pile for something a bit different - I'm sure it's not the case, but it feels like I am overwhelmed with a pile of Victorian VMCs to read. It's an unusual book since it followed a film, which Birtles helped to write - the film certainly doesn't seem to be available anymore, but there is some information about it on IMDB here.

Set in the Australian outback during the Second World War, it tells the story of what happens as the Japanese start to try to take over areas of the country, and a trek made by one man, Dan McAlpine, with 15,000 cattle to Queensland, to make a place where food can be provided for the Australians. Dan is joined by the Parsons family - Ma, Pa, Mary and Helen who want to escape the bombing even though they have built up their home and business in the Northern territory. What amazing characters Mary and Helen proved to be - exactly the sort of young women that make Virago Modern Classics worth reading, strong, full of character. I loved the descriptions of the riding and the herding of cattle that they get involved with, but at the same time there is the sobering realisation that the people of Australia faced many of the same fears of bombs and war as people did in Europe.
It's Birtle's only novel and it has been published just the once by Virago with this original green cover.
Posted by verity at 18:37 3 comments: