I remembered whilst I was writing my review of Hudson River Bracketed the other day, that I had never blogged about a Wharton novel that I read pre-VVV - The children - so I thought it was time that it had a post of its own, for completeness sake. It's been quite a while since I read it, so I'll share the synopsis from Amazon.com....

"A bestseller when it was first published in 1928, Edith Wharton's The Children is a comic, bittersweet novel about the misadventures of a bachelor and a band of precocious children. The seven Wheater children, stepbrothers and stepsisters grown weary of being shuttled from parent to parent "like bundles," are eager for their parents' latest reconciliation to last. A chance meeting between the children and the solitary forty-six-year-old Martin Boyne leads to a series of unforgettable encounters. Among the colorful cast of characters are the Wheater adults, who play out their own comedy of marital errors; the flamboyant Marchioness of Wrench; and the vivacious fifteen-year-old Judith Wheater, who captures Martin's heart. With deft humor and touching drama, Wharton portrays a world of intrigues and infidelities, skewering the manners and mores of Americans abroad. "

It's been published three times by Virago - original green, modern green, and a modern cover, which is the one that I picked up in Borders a few years ago. I actually love the picture which is on the front of the modern edition, as unusually, it sums up the content rather well.

As I've said before, I have a somewhat mixed relationship with stalwart Virago Modern Classic author Rebecca West. So I wasn't quite sure whether or not I would like Sunflower, especially as it seemed to be somewhat different to some of her other novels. It's described as an unfinished fragment, although it is just as long as any of her other books. Where it differs I think, is the extent to which it is autobiographical.

Sunflower, of the title, is an actress and mistress to Lord Essington ("Sunflower" is his private name for her); she leads a glamourous life, but really wants to settle down in domesticity, and this leads her to pursue a millionaire politician named Francis Pitt who she believes will help her to attain this.

Apparently, this is a portrait of Rebecca West's relationship with HG Wells (Essington) and her doomed obsessive love for the politician Beaverbrook. The afterword says that those who knew West would not have recognised her as Sunflower, but surely, in a novel like this you would want to describe yourself as you would like to be? I found the novel quite absorbing although I couldn't quite decide whether I sympathised with Sunflower or not, but I think I was fascinated by the idea that it was based on real life.

It's just been published once by Virago with the original green cover - I can't help feeling disappointed that Virago didn't use an appropriate Vincent Van Gogh for it.
Posted by verity at 19:10 2 comments:

I started out by looking at reviews on Amazon when I came to write this blog about Bodily Harm by Margaret Atwood. I have a mixed relationship with Atwood - I find some of her more futuristic writing quite inaccessible, and some of her books are compelling whilst others I have struggled to get into at all. The consensus on Amazon was that this was a disappointing Atwood novel; I disagree as it was one that I found quite gripping. Whilst, from the synopsis, on the back of the book, you might expect it to be a thriller, it is more of a book about a woman and her life, cleverly building up a picture of her life with flashbacks from the present.

The principal character, Rennie, is a journalist, who, takes an assignment to a Carribean island in an attempt to get away from her life. In the early part of the book we learn about how her relationship with her boyfriend Jake has broken down, and how she has suffered a masectomy. But whilst in the Carribean she becomes heavily involved in some political upheaval and an attempted coup to overthrow the government. I was less interested in this story than in learning about Rennie's life, although the dark ending made me wish for a more uplifting conclusion.

It seems to have been published as a VMC twice, once in the original green edition with the wonderful abstract picture on the front (I just love those colours!) and once in a modern version.

Given my previous experiences with Wharton (with one exception, not very good), I'm not quite sure why I picked out Hudson River bracketed in the Oxfam bookshop. I suppose it was a combination of the immaculate original green edition, and the fact that because of this challenge, I will have to read it at some point.

It is one of Wharton's later novels, and the high society theme which characterises some of her most classic books (which is the thing I think I struggle with most), is less apparent. The book can essentially be summed up as "a portrait of a young man"; the main character is Vance Weston, who upon becoming ill, is sent off to convalesce with cousins who live by the Hudson river. While he is there, he meets Halo, a writer, who inspires in him a great love of literature, and the book follows his struggles to become a writer. He meets Halo later in life, and she introduces him to the literary circles of New York. Unsurprisingly, I enjoyed the first half of the book much more - although it does pose an interesting comparison between what Edith Wharton paints as the naieve Midwest and the glittering New York.

There's a sequel, which I also picked up at the same time - The gods arrive. I shall try to have a read of that in the next week, although I have to say that it is not a sequel I am especially looking forward to reading.

This one has been published twice, once in original green, and once in modern green.

They're not out til August, but I was so excited to open a box brought back from the sorting office by K last night and see these wonderful hardback Virago modern classics which Virago have so kindly sent me. You may recall that they brought out 6 hardbacked VMCs a couple of years ago, to mark the 30th anniversary of the imprint, I've managed to collect 5 of those 6, and so I was very happy to have these to add to my collection and to show off to you all! 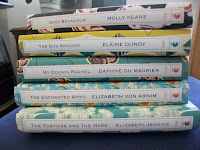 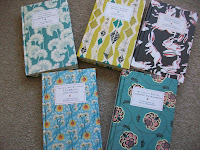 The titles are:
The tortoise and the hare (Jenkins)
The dud avocado (Dundy)
The enchanted April (von Arnim) [I have read this but seem not to have blogged about it - must rectify that]
My cousin Rachel (Du Maurier)
Good behaviour (Molly Keane) [the only one that I haven't read - not a huge Molly Keane fan but will give it a go very soon, inspired by this!]

I do own copies of these already in paperback editions, but who could resist a second beautiful hardbacked version for their shelves? You can find information about the cover designers on the Virago website here.
Posted by verity at 19:38 7 comments:

Like yesterday's read, I have to confess again to picking up Brother Jacob from the TBR pile for its size - a mere 50pp + afterword, made it one of the slimmest VMCs that I've seen (with the possible exception of The yellow wallpaper). Having not particularly enjoyed Eliot's, The lifted veil, I have to say that I didn't anticipate this one very much, especially when the introduction told me that this novella was even more overlooked than that one.

It is the tale of David, who decides that he wants to become a confectioner, but upon taking up this trade he finds it much harder work than he had imagined, so he decides that he will emigrate to the West Indies. He doesn't have enough money, so tricks his brother, the rather simple Jacob, so that he can steal his mother's savings, and off he goes. The story then switches to another confectioners' shop, run by an Edward Freely. But who is he? The arrival of Jacob on the scene reveals everything...

I guess I might have better luck with Eliot's other more well-known novels, but of course they aren't VMCs!

It's just been published once by Virago, with an original green cover.
Posted by verity at 17:52 No comments:

I have to confess that I picked this one out of the tbr because it was a) relatively slim and b) had reasonably large handwriting. But I was very happy to see that it was a book about marriage; marriage is something that is definitely on my mind at the moment, with a wedding in 21 days time.

The book starts however, with Ruby, the wife, dying in hospital at lung cancer, aged 45. Her husband is at home after her death, eating food that she had prepared out of the freezer. The end of marriage is something that absolutely terrifies me; as K is older than me I am quite likely to be the one left behind, and I just can't imagine it. From that chapter, we go back in time, with chapters narrated alternately by Ruby, and her second husband Jack, in order to piece together the story. Jack was responsible for rescuing Ruby after her first husband was killed, and she was left without any money or anywhere to live. Jack is 20 years her senior, but never married, not being particularly attractive or successful. It's an unlikely match, but the pair grow to love each other.

Gibbons has written some other VMCs, including Ellen Foster, and like that book, I found that this was an emotional read; it might not be very plot driven, but I liked the characters and the journey that I went on with them.
Posted by verity at 18:15 1 comment: 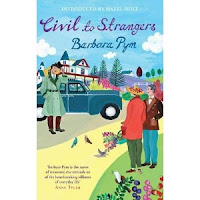 I'm excited that another Pym novel has made it back into print - it looks like Virago may be bringing out the complete set of her novels, as I see from Amazon that Crampton Hodnet (such an underrated Pym novel) will be out in May 2012. I just love this colourful cover which has Barbara Pym written all over. It's out today, 7th July.
Posted by verity at 08:01 1 comment: 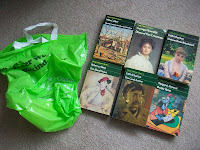 Why yes, I may have popped into the Oxfam bookshop in Thame when I went to the cake shop to buy icing for my wedding cake. They had LOADS of green Viragos, including these which I didn't have. TWO Edith Whartons - not quite sure what I was thinking there, but they are beautiful, so maybe owning them in original green editions may encourage me - I hope so as they are mighty tomes. Ditto, Rebecca West, I am a little indifferent over, but I am excited by another Margaret Atwood. I've only read Death comes for the archbishop, and actually I can't remember what sort of edition I already own it in, owing to the disorganisation of my VMCs which are still waiting for shelves...

I must get back on track with the VVV so hope to write about some of these soon.
Posted by verity at 16:49 3 comments: