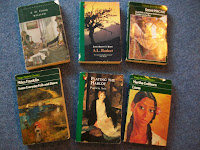 Of course one should mark Virago Reading Week with some new books...I have eight to add to my collection (although only six are shown here). Last Sunday I was at work, but my lunchbreak got interrupted and I had to come back to the building early and could not be bothered to trudge back to the staffroom for the remaining 10 minutes. So rather fatally, I followed an email that I had been sent by Awesome books for Bargain Bin madness to see what I could find in the way of VMCs. I ended up getting 12 books for less than £20 including postage (the rest were non VMCs). Of the above, I have already read William, although not in a Virago edition (and I'd still upgrade it to the older green cover if I found one).

I am most looking forward to the Miles Franklin - Some everyday folk and dawn - as this has been on my wishlist for ages, since I loved her "Career" books which I read as part of this blog.

I am also looking forward to the A.L. Barker, John Brown's Body, as this is an author I am een to discover (and indeed, one of the other books I bought from Awesome books was The haunt by the same author, which I have been after for a while as it is set in Cornwall).

The other titles are Playing the harlot (Avis), Dust falls on Eugene Schlumbucher (Mackay) and Liana (Gellhorn). I am pleased that none of them are chunksters which may entice me into reading them sooner rather than later.

The other two titles I picked up this weekend were from a little second hand charity bookshop in Woodstock which I'd never been before. I was happy to get a copy of The love child, which I'd borrowed when I read it for this blog, as well as Playing the harlot by Eudora Welty. Both for £1 each! Will be returning to that bookshop another time...

I am determined to keep up the momentum that Carolyn and Rachel have prompted me into this week.