Desert of the heart (Jane Rule) 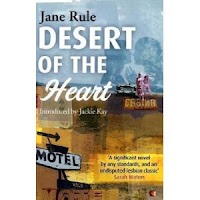 Another slightly dilatory review - I mentioned a little while ago that I was very excited to have recieved the latest VMC published, direct from Virago, but that it was under embargo. Of course, I couldn't resist reading it straight away, and I should have written down my thoughts on it then, rather than waiting until I was allowed to, by which time I have lost some of the immediacy of reading it.

More akin to Valley of the dolls, or The group, or Peyton Place, than perhaps the cosier VMCs such as the Jane Austens, EH Youngs, Elizabeth Taylors or Rosamund Lehmans, this is one of the first lesbian classics. Set in the 1960s, it tells the story of Evelyn, an English professor in California who travels to Reno in order to obtain a divorce from her husband. She is required to stay for 6 weeks, and finds herself a place in a boarding house. Here, she encounters Ann, the daughter of the boarding house owner, who falls in love with her and sets about seducing her. It's a compelling story, not least because there are a number of threads going on - we learn about the nightclub where Ann works and the intricacies of the girls duties working on the betting games, we find out eventually, the reason why Evelyn wants a divorce, and we gain insight into relationships between women and what will make it work. The ending is surprising, it's difficult to say more without spoilers!

It's only £5.99 on Amazon, - I don't often suggest buying books on this blog, but I would recommend it, not least because I think that the Virago Modern Classic imprint deserves support (which it doesn't get when we collect original green editions from our second hand bookshops!). And I like the collagey cover.

(Apparently there is also a film, not sure if it would translate so well to screen - I think whilst it is the sort of book that filmmakers would enjoy making to the film, I found the book so vivid and immediate, I don't think that that could be matched on screen).

And...there's an introduction to the book on the Virago website here.
Posted by verity at 10:17