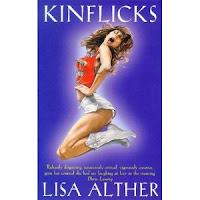 I was intrigued by Kinflicks when it arrived from an ebay purchase last year, because the cover is so unusual and unlike any other Virago books. Somehow it didn't entice me - either that or the fact that the book is 576 p. long. But I did enjoy it when I got to it!

Like many books, it combines life in the present with a review of life in the past. The main character Ginny Babcock is at the bedside of her dying mother, and in the third person, we are told about Mrs Babcock and Ginny's time with her. These chapters are interspersed with memories from Ginnie's childhood, or "kinflicks":

It's an entertaining story - Ginny starts off dating a school jock, nearly runs off to get married to him, but both stand each other up (and only discover this years later), falls in love with a motorcycle thug, has a lesbian affair whilst at college, and then gets married to a boring insurance salesman. She has a baby, but motherhood isn't enough, an affair follows....

Just published once by Virago (and it does have a green spine as you can see here.) I'm intrigued to see whether the cover of Alther's other VMC is also so unusual.
Posted by verity at 17:00